By Ed Williams – Member of Asheville Engineers Without Borders

Below are text messages sent to my wife, Cathy, while visiting Kenya, Africa as part of the Asheville Chapter of Engineers Without Borders (EWB) project to construct a medical waste incinerator inthe rural Kenyan community of Uluthe.  Tim Heim, engineer, co-worker, travel partner, and I were tasked with overseeing the final construction of and training the local health workers in the operation of the incinerator.

On a past EWB project, where a well was installed in the community of Uluthe at the site of the clinic, children were observed fishing a soccer ball out of a pit where medical waste from the clinic is burned.  It was then that the need for proper medical waste disposal was identified and the project idea was hatched.

The “De Montfort” incinerator design to be used was developed as an inexpensive but effective incinerator which could be built in almost any developing country, but would meet the criteria of a temperature of above 800 degrees Celsius with a residence time of over 1 second.  The small and simple incinerator is easy to operate. A small amount of firewood is used to get the heat up in the incinerator, then the medical waste is added and the heat from the burning of the waste plastics, syringes, etc.. is what brings the unit up to 800 degrees C. Its dual stage combustion destroys both pathogens and toxic organic emissions, making it the most sophisticated waste disposal device in a large region.

George picked us up at the compound at 6 this morning and drove us to Kisumu where we met Winnie, our area travel agent and owner of the safari company, and Jonathan our safari van driver and guide. We had some breakfast then Tim, Jonathan and I headed for Masai Mara, about a 6 hour drive. The landscape changed as we gained elevation and got into tea plantation country. Very pretty green fields and less populated than where we came from. The last two hours to the game reserve were dirt, potholed and bumpy. We got to Masai Mara around 3:30pm, took a bite of lunch, and got settled into our quarters, a big canvas tent sheltered by a thatch roof. We also have our own bathroom with a shower. We headed out for an evening safari. There was a nice rain in the afternoon, and being higher in elevation, it was actually a bit cool. The first time on this trip I wasn’t sporting a layer of perspiration. Had to break out my jacket, which was kind of nice.

We drive through the entrance gate out onto the savannah and it wasn’t long before the wildlife viewing was on! 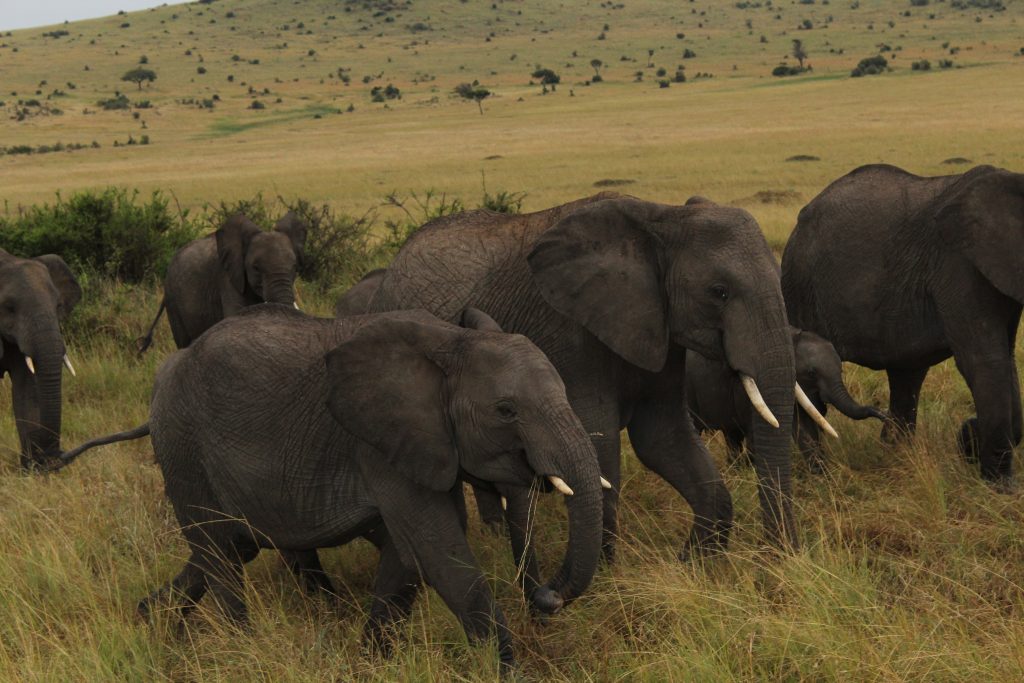 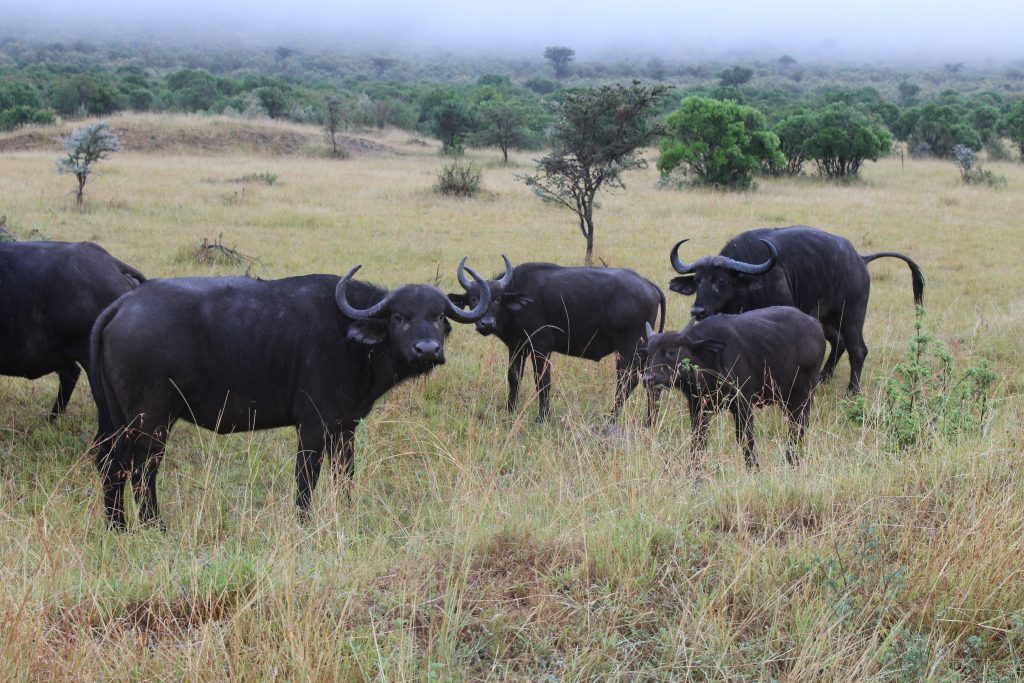 Didn’t see any big kitties, but hoping to see them tomorrow when we set out for an all day long safari. Going all the way to the Mara River where we might see hippo and crockadilos. Jonathan is an excellent guide and seems to know how to get in the right place at the right time.  As I write this sitting here, I’m listening to lots of cool sounds in the night. Also, my new binoculars are working famously. Wuv you!! 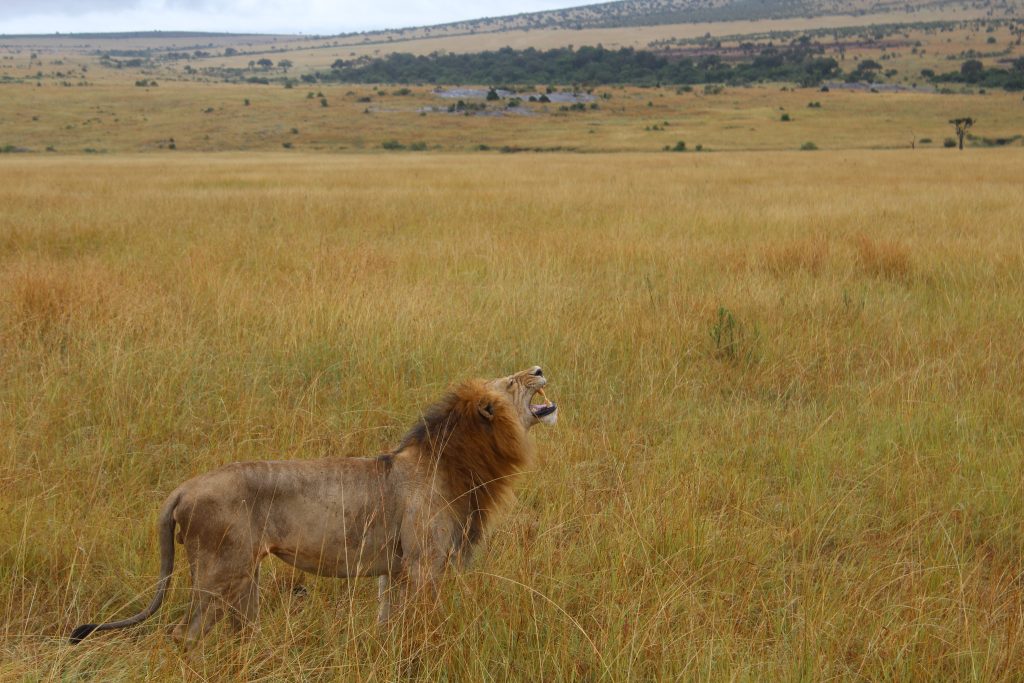 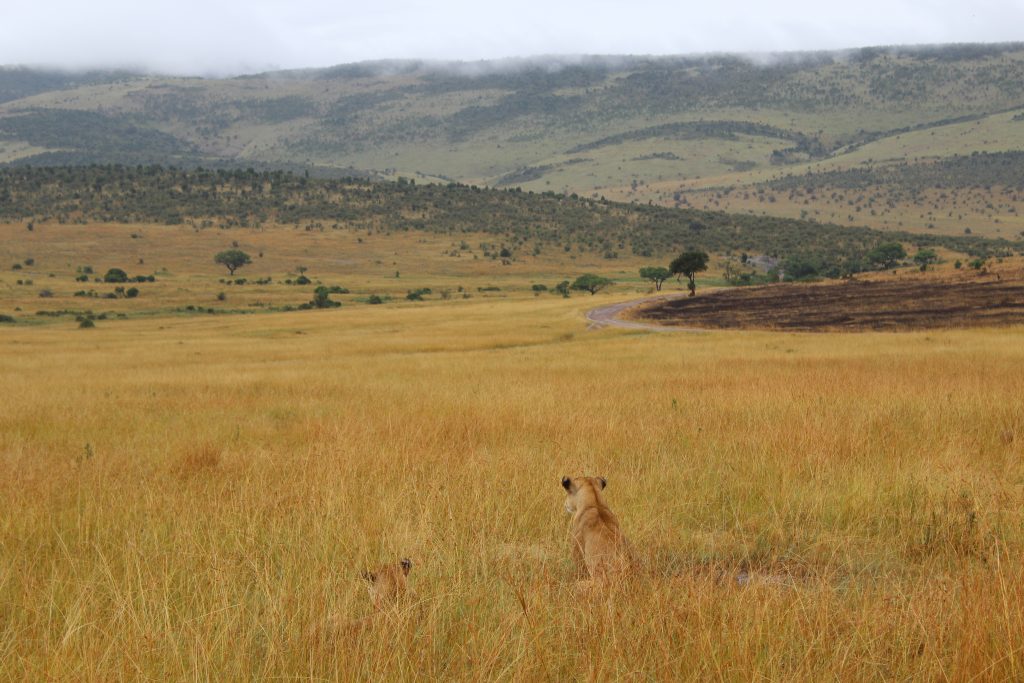 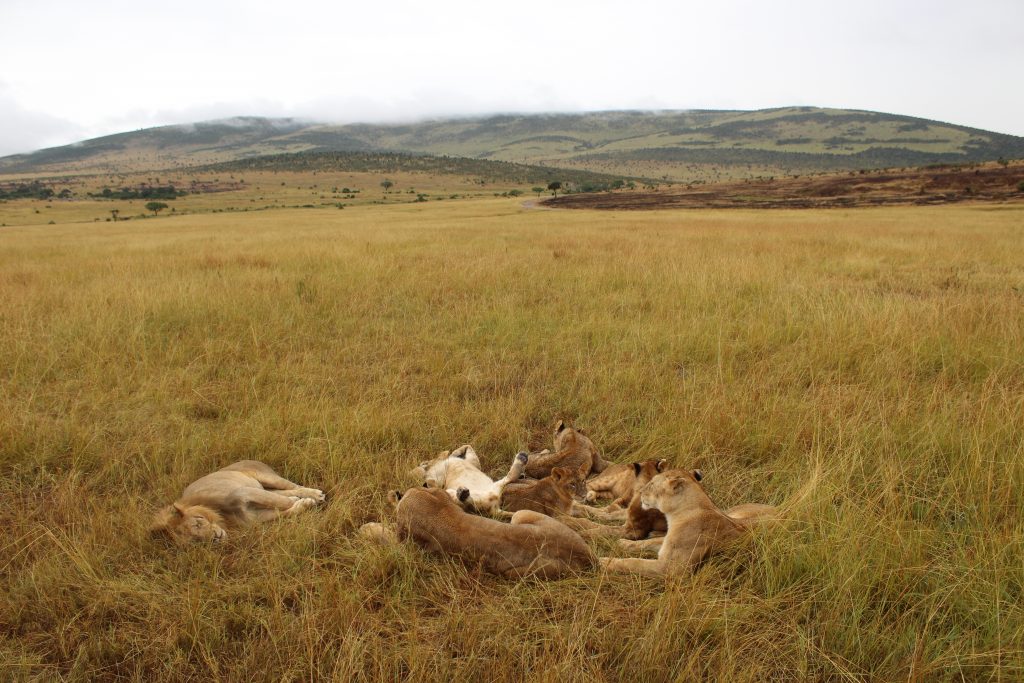 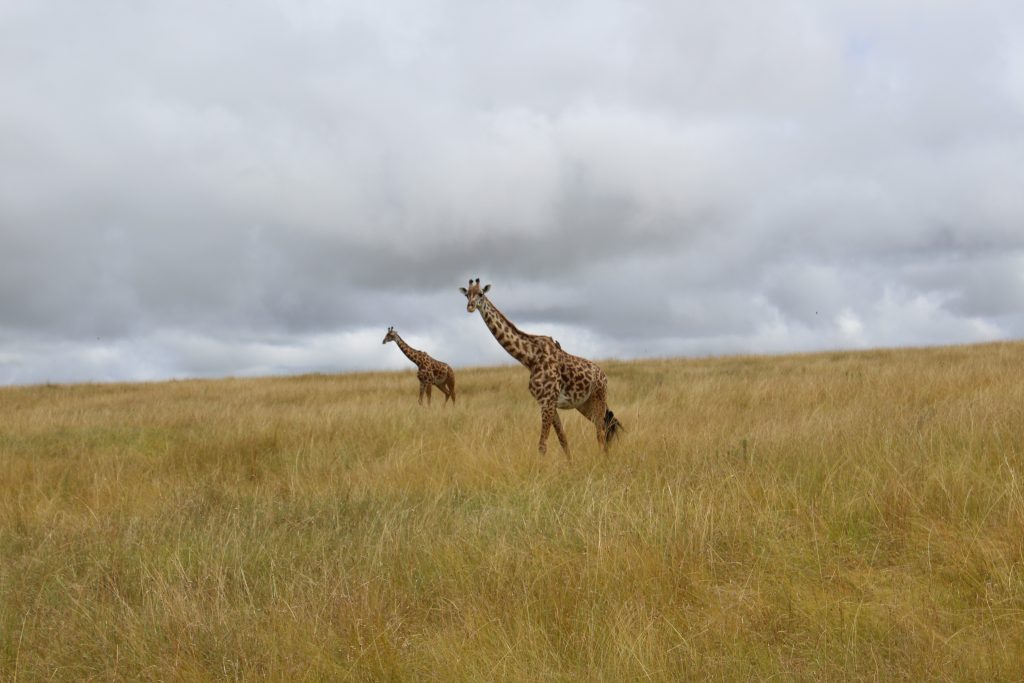 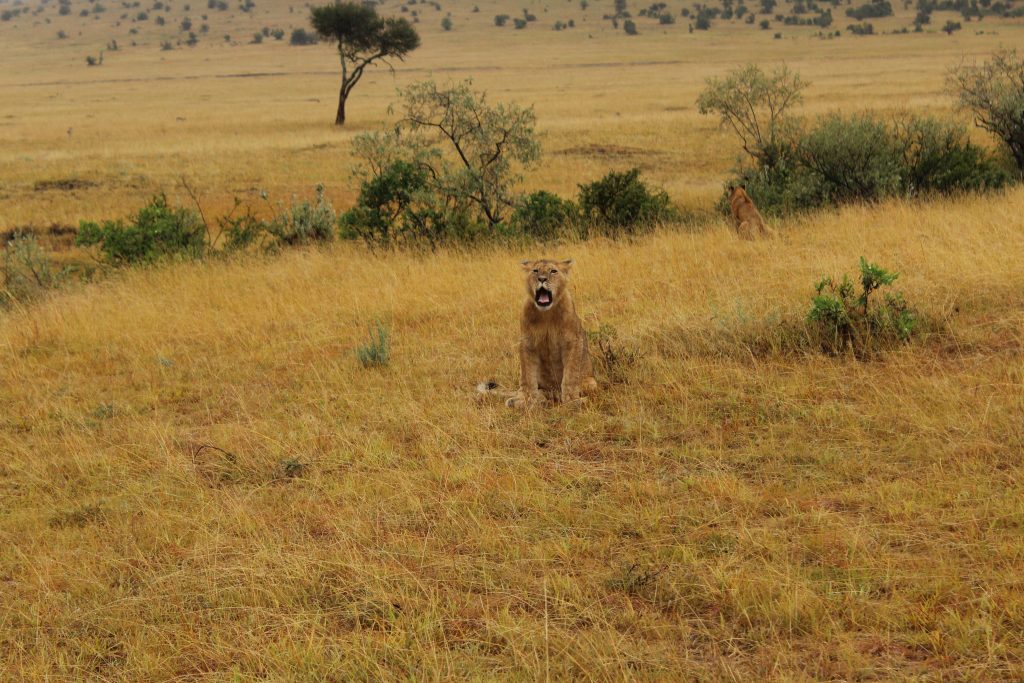 Was another beautiful day in Kenya. Will give you details when I get home, but a few highlights for now. Lots of lions!  ROAR!!! Came upon some lion families. One group we drove right up on were sleeping and cleaning one another. Our Toyota safari van is 4WD and the roof completely pops up so you can stand up and look around. We got so close to this group, daddy, two mommas and 5 cubs that you could literally spit down on top of them. Dadda was just sleeping heavily and the rest of the pride were just piled up on each other licking, loving and being sweet. Wait til you see the pics!

Went down to the river and saw a big mess of hippos. Lots of wildlife seen on the way. Jonathan is a great guide. On the way back we spotted a leopard up in a tree with his kill from last night, a Thompson’s Gazelle. You would have been sad.

Saw tons and tons of cool birds. If you came here just for the bird watching and the incredible landscape and hanging out with the Masai people, it would be well worth the trip. Throw in all the other wildlife and well, unreal. 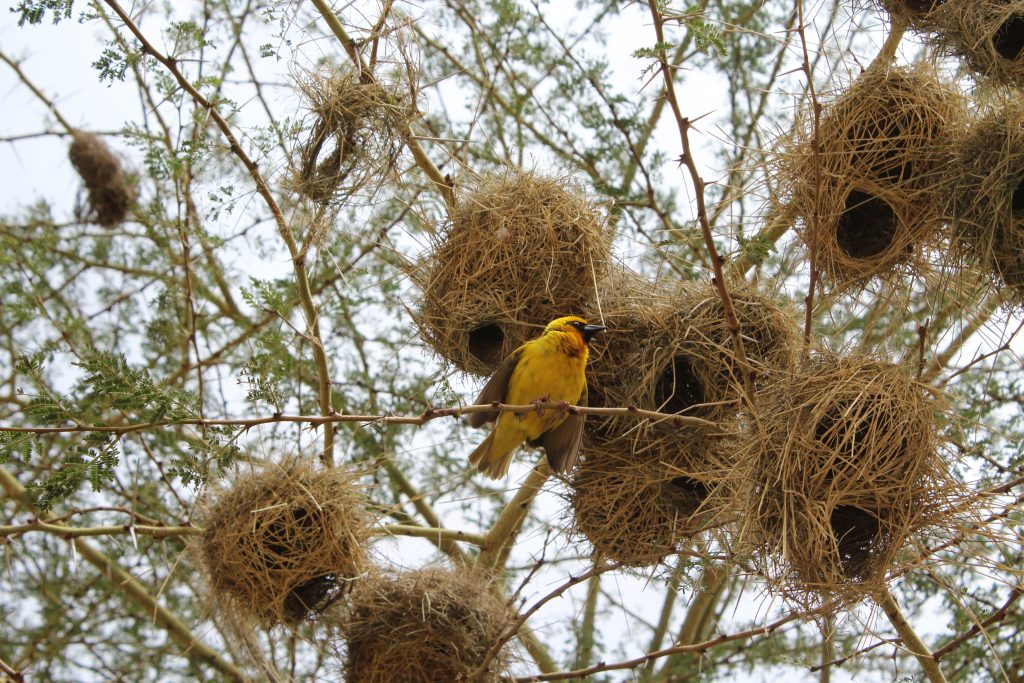 In addition to seeing most of the wildlife species we saw yesterday, today we saw:

We left the Masai Mara this morning about 7 for the six hour drive to Nairobi. The drive was nice as we descended into the Rift Valley, the Cradle of Mankind, then up and over its eastern escarpment and down into the big city. It was a bit of a shock to all of the sudden be in the noise, dirt and hustle & bustle of Nairobi. We headed into the city center and to our little oasis in the middle of the madness. The Fairview Hotel sits on a hill overlooking the city and just next door to the Israeli Embassy. It’s actually run and owned by the Israeli’s and the security is tight. The hotel is beautiful with gardens, courtyards, swimming pool and plush accommodations.

Peter, the student studying engineering in South Africa, called to see if we want to do something. He’s staying with his parents in Nairobi for another week or two before going back to school. Not sure what he will have in store for us this evening. Will report back later if I’m not too tired.

Ps: I saw a pair of little Dik Diks on the drive out of Masai Mara!

Peter and his Scottish girlfriend Nikki came by the hotel, had a drink and brought us back to his parents’ house in a suburban neighborhood called Karen. It was all the family members we had dinner with at the compound in Sigomre plus his sister. Their house was incredible and had a big yard with gardens and sitting areas. They served us a nice dinner with grilled beef and chicken and veggies. Had the first cauliflower since leaving the states. It was Peter’s 25th birthday so we had cake and custard and we all sang happy birthday just the same as we would at home. His mom even threw in a last verse similar to the one my mom always sings me about the monkeys and the donkeys. We talked, had lots of fun, and Peter’s sister brought us back to the hotel since she lives close by. We’re getting the full local culture experience for sure.

Finished off the night by the pool. Lots of kitties running around and velvet monkeys in the trees. Goodnight Wifey! 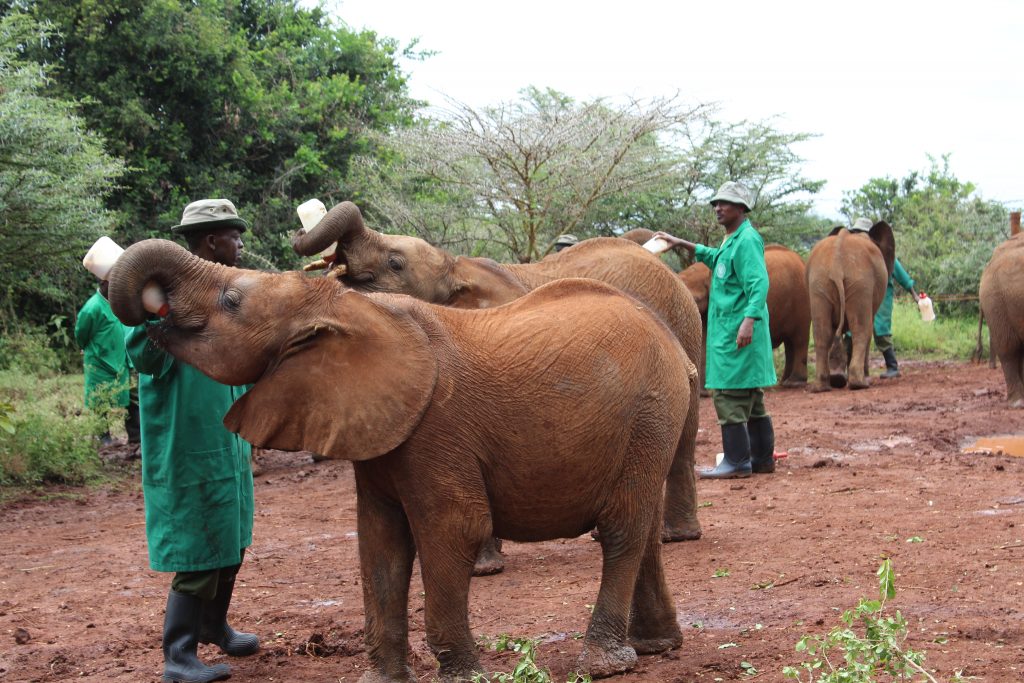 Today we did the Nairobi tour. Had a 1st class breakfast at the hotel (included with the room fare), then Jonathan picked us up at 9:45. Went by the Galleria Mall and got some goodies before heading over to the Baby Elephant Orphanage for the morning feeding, 11-noon. They brought out the first group of babies, about fourteen 1 to 2 year olds, and fed them two big bottles of milk each. They use a human baby formula mixture. After sucking down their bottles, the baby elephants chewed on branches and leaves and mingled a bit with the tourists looking on from behind a rope. One came over by me and I got to pet it some. After that, another group of fourteen babies came out, 3-4 years old. They told the different baby elephant names and how they came to the orphanage, mothers killed by poachers, conflicts with farmers, mothers dying of natural causes, babies getting stuck in wells and watering holes, etc..  It was cool to see the babies, but sad that such a place must exist.

We then went on to the Giraffe Conservancy. It’s a captive breeding program for endangered species of Kenyan Giraffes. There are several giraffe types in Africa. We got to feed and pet some of them. Beautiful animals! 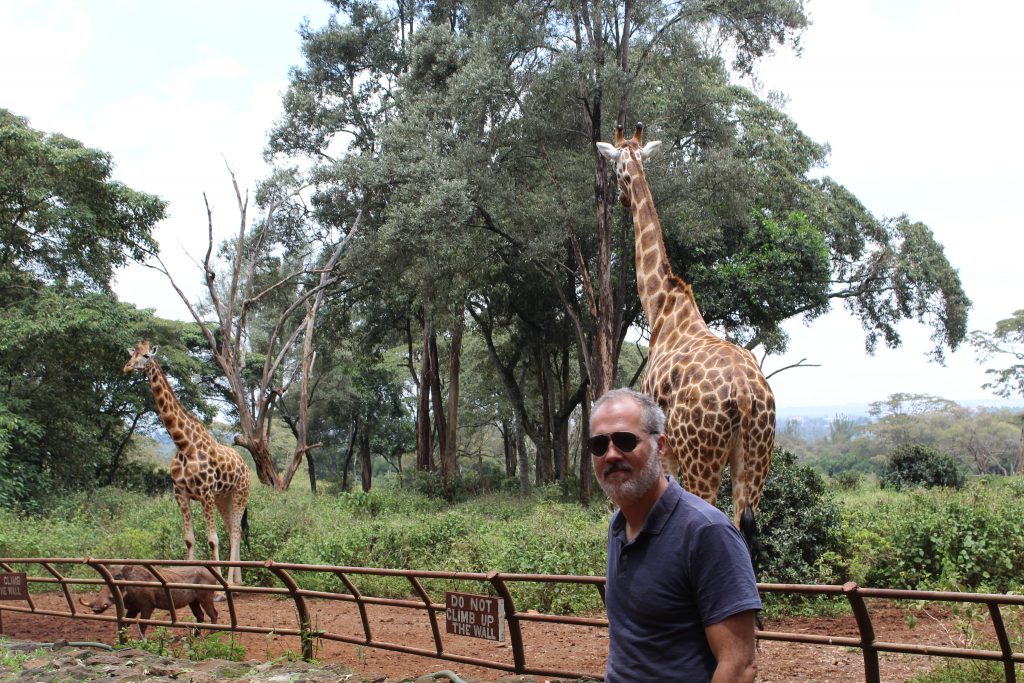 We waddled out of Carnivore and cruised on over to Bomas Cultural Center where we sat and watched dancers performing traditional dance from different tribes of Kenya. Very cool. We also strolled around the grounds looking at homesteads of the different tribes, thatch huts and so on.

We’re back at the hotel relaxing after a long day.  Mary and her daughter are coming by at 6:30 to bring your dress and things.

It’s been unreal, but now I’m ready to get home to my Wifey.

Love you!!  Have fun with Emma!  I’m having my evening tea I’ve grown accustomed to. Kenyan tea with hot milk…African tea.

Tim and I are sitting at the airport waiting to board for our long journey home. George met us this morning at the hotel and we went to check out a few sites and have lunch before going to the airport.

We went by a bookstore at the mall where George turned us on to some books about Kenyan culture. Then we went to the Karen Blixxen museum. She’s the author who wrote “Out of Africa” and other books. It was the home and coffee plantation where she lived with her husband, Baron, and then her lover after she and her husband split up. We had a tour guide take us around the grounds and house complete with most of the original furnishings and artwork. It was way cool and you would have loved it.

After that we went to where they make Kazuri beads. We got the tour of the facility and rooms where at least a couple hundred women were busy making ceramic beads and jewelry. Pretty cool.

Then we went for some lunch, hamburger and fries. Need to start acclimating to life in the US. George ordered me some chocolate birthday cake which was pretty good. Tim and I wolfed it down, since George can’t eat sweets due to his diabetes. Then on to the airport where we parted ways with our friend, George, a very wise man and teacher from whom we learned a hell of a lot.

The other night at dinner, Pamela said Africa is a land of extremes: extreme natural beauty and extreme environmental degradation; extreme wealth, extreme poverty; extreme vastness, extreme overcrowding; and so on. Not sure how or if Africa has changed my way of thinking. It will take weeks to process it all. So much packed into two weeks. It certainly was an eye opener. So many new friends made, so much seen. Don’t think I’ve ever seen a culture so welcoming and friendly. The Kenyan word for Welcome is Karibu, a word I heard many times. Maybe someday we can come here together and I can show you around and take you to meet my new friends. Can’t wait to get home and see you!

You deserver some good news once in a while.

About the Asheville Professional Chapter

We are a team of experienced professionals with a variety of backgrounds, not just engineering. It takes people of all professions to accomplish good things in the world.

If you are passionate about helping people solve problems and improve their lives, drop us a line. We'd love to have you join our team.

Engineers Without Borders USA builds a better world through engineering projects that empower communities to meet their basic human needs and equip leaders to solve the world’s most pressing challenges. Our 16,800 members work with communities to find appropriate solutions for water supply, sanitation, energy, agriculture, civil works and structures.